After nearly 12 years at Ryans Horses, Hazel Shannon is starting a new chapter at Willinga Park. Equipped with a wealth of knowledge from training with Heath and Rozzie Ryan, and supported by Terry and Ginette Snow, the first stop on Hazel’s latest adventure is France.

Hazel Shannon arrived at Ryans Horses in Heatherbrae in 2010 as a 17-year-old with aspirations of becoming an eventer — even though she’d never ridden at a one-day-event. Hailing from North Queensland, Hazel’s eventing dreams were inspired by her mother and her aunt, who had grown up in England surrounded by eventing greats. Hazel’s aunt told Hazel as a youngster that when she was old enough, she could go and train with Heath Ryan — so when she finished school, that’s what she did. 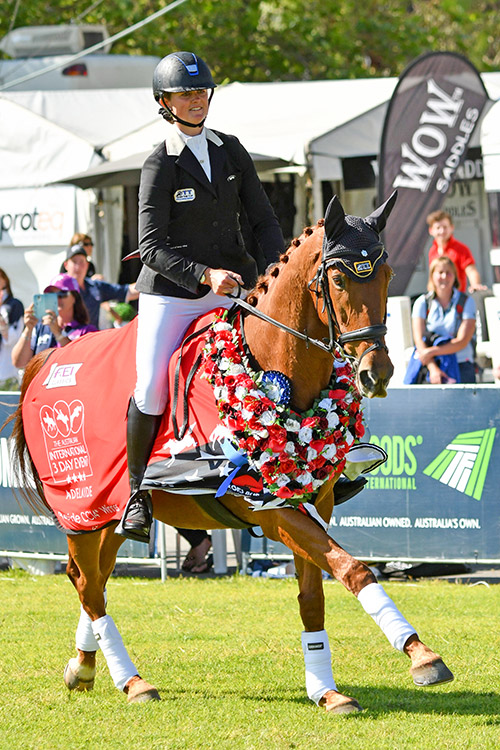 Hazel Shannon and Clifford after winning their first Adelaide five-star in 2016. © FEI/Julie Wilson

Since then, Hazel has won a record three CCI5* Australian International Three-Day Events (Adelaide) and a further eight events at FEI level. This year, she was named a non-travelling reserve for the Tokyo Olympics and spent a week in pre-export quarantine (PEQ); although she didn’t receive the call-up to compete, the experience gave her great insights into preparing for a major championship.

“I got a lot more from PEQ than what I was anticipating, information-wise,” says Hazel. “I spent a week around the best riders in Australia preparing for the Olympics, so it was awesome to be around them, watching them, and seeing how they do things. Shane Rose, Stuart Tinney and Sonja Johnson have been to previous Games, so there’s a lot of knowledge there, and I also learnt a lot from New Zealand’s travelling reserve rider, Bundy Philpott. They were all happy to share insights and pass advice on to someone like me who hasn’t done it before. So it was really good to watch them prepare… and then to watch Shane perform well and come home with a team medal topped it off!” 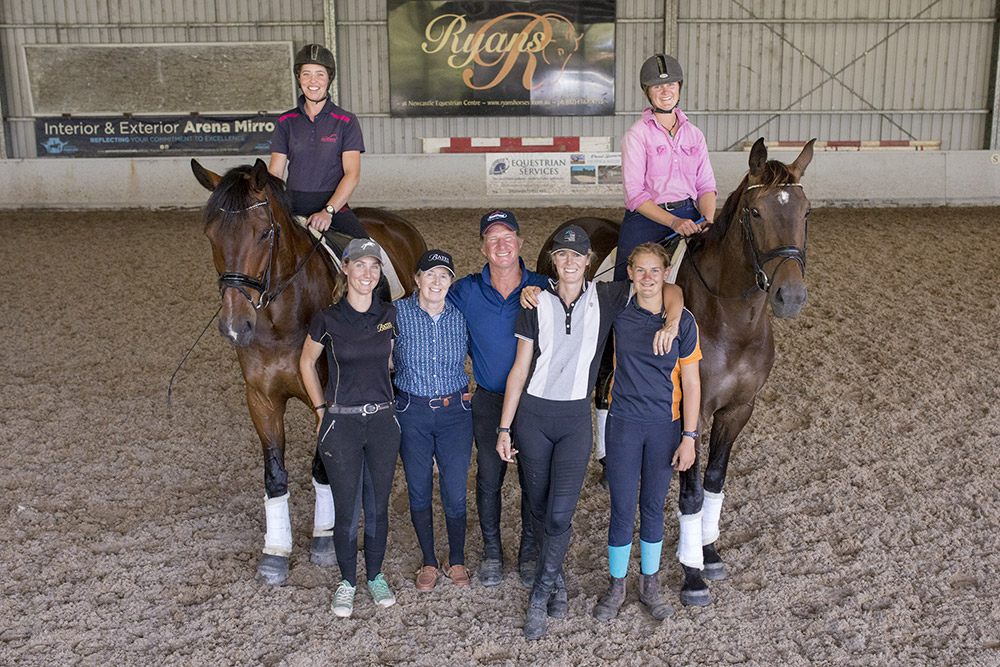 After more than a decade at Ryans Horses and with the Tokyo Olympics over, it was time for a change of scenery for Hazel — and so in early September it was off to Willinga Park, further down the NSW coast at Bawley Point.

“It’s the most amazing facility I have ever seen, and maybe I’ll ever see!” says Hazel, who’s excited to make use of the ever-expanding facilities that are increasingly being designed to accommodate eventing. The venue was set to host its first horse trials, Eventing@Willinga, later this year, although this has now been postponed until 2022 due to Covid-19 restrictions.

“Willinga now has the biggest show jumping arena of its sort in the southern hemisphere. There’s a shed of cross country jumps being built, and they’ve also just put in a really amazing grass gallop track,” says Hazel. “It’s very, very lucky for all the eventers in Australia to have people like Terry (Snow) building a facility and planning events like this. I know myself and all the other eventers in Australia are hanging out to compete here and make the best of this amazing facility.

“Terry’s owned Clifford [Hazel’s three-time Adelaide winner] for about five years now, so I’ve had a connection to Terry and Ginette for a while and so it seemed the obvious move for me to come here,” says Hazel. “They’ve been really great supporters.”

In 2017, Hazel’s star off-the-track thoroughbred Clifford — who started life in Tasmania and was partnered with Hazel by chance when he was spotted as a relatively insignificant horse on the property next to the Ryans — was about to be sold due to his owner suffering financial hardship. At that time, Hazel and Clifford had been together for four years and had won their first of three Adelaide five-stars. Heath recalls drafting an email to Terry at the eleventh hour, and to their surprise Terry stepped in and purchased Clifford — now WillingaPark Clifford — allowing the exciting partnership to continue. Ginette is also a huge supporter of Hazel’s and has been behind her ever since.

Two further wins at Adelaide followed among many other successes, and although Hazel and WillingaPark Clifford missed out on selection for the Australian eventing team at Tokyo, their journey is far from over. 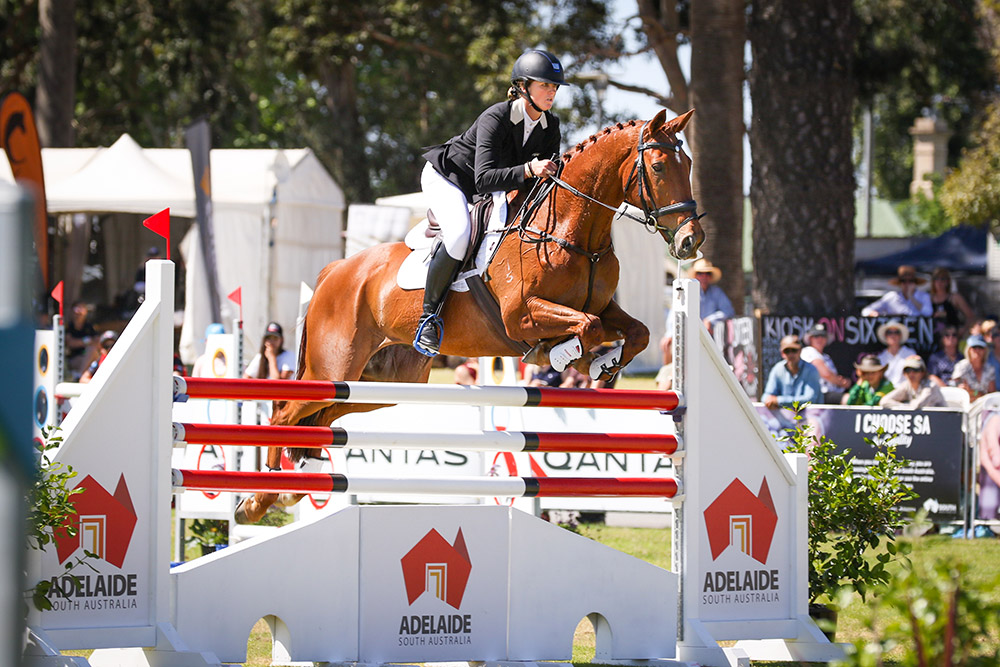 Hazel and Clifford jump to victory in Adelaide in 2018. © Michelle Terlato

“We’re heading off to compete at Pau (27-31 October),” says Hazel of her next adventure with Clifford. “Clifford has done six five-stars now; he’s done five in Australia and also went to Kentucky. He’s 16 and he’s getting older, and we just thought there’s really nothing happening in Australia – we probably can’t make the team for the World Championships next year from Australia – and we’ve got a great horse who’s at the peak of his career. Terry very generously is sending us over to France to gain some experience and compete at one of the biggest events in the world.”

The facilities at Willinga have already been put to good use preparing Clifford for his trip abroad, with Hazel explaining they’ve been regularly using the equine solarium and water treadmill to keep Clifford in peak health. Willinga’s dressage rider, Jayden Brown, has also given Hazel a hand. “Jayden, who needs no introduction as he is winning everything, has been helping me through the Pau test. He’s been great.”

The plan for Pau is very much to travel there, compete, and then come home — a recipe that worked for Shane Rose in 2019 when he travelled to France and finished third at the event with Virgil.

“Speaking to the High Performance team in Australia, it is great to go and do a stint overseas, but the best results have come from going there to do one big event. With eventing, once you do one, your horse can’t go and back that up again right away. So we made the decision that, in the horse’s and my best interests, the best plan is to go and do one big event and then come home again. Heath has always been a big supporter of that too; there are a lot of people telling me that’s the preferable option,” explains Hazel.

Hazel says that if it was just about qualifying for the 2022 World Championships in Herning, a four-star long would suffice — and that could possibly be achieved on Australian soil. However, with events few and far between here at the moment, a five-star on foreign soil is likely a better way to get the attention of selectors for next year.

“Going to Pau will hopefully qualify us for the World Championships and it will be invaluable experience for me for the future. Terry and Ginette Snow have been so generous with their support and providing me with opportunities I could never have imagined.” 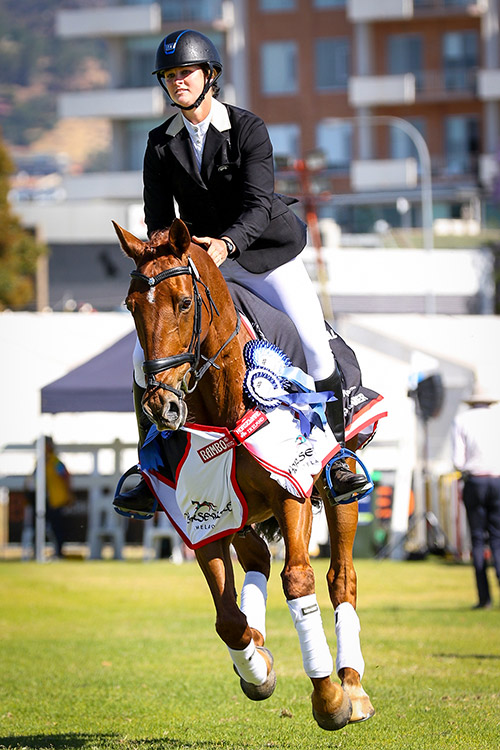 Hazel and WillingaPark Clifford after winning their second Adelaide five-star in 2018. © Michelle Terlato

While the immediate goal is Pau and then next year’s World Championships, Hazel also has her eye cast further afield.

Clifford is her only competition horse at present, however, she has an impressive three-year-old, also owned by Terry and Ginette, now under saddle. “He’s an embryo transfer out of Emma Bishop’s five-star mare Issey Miyake, by five-star stallion Chilli Morning,” explains Hazel. “It’s pretty amazing breeding. Sometimes you can breed these horses and you get them and they’re not very exciting – but at the moment I really like everything about him.” As Heath Ryan explains in this issue’s Ryan’s Rave, another son of Chilli Morning, Chilli Knight (who is also out of a five-star mare) has just won Bicton CCI5* — and Heath believes in terms of breeding future eventing stars, these could be bloodlines to watch.

“I think [the three-year-old by Chilli Morning] has sparked us on to breed a few more. Terry is building a vet hospital here at Willinga and he’s got a big breeding section led by reproductive specialist Dr Eric Klaui, so we are talking about breeding some and buying a few more.

“I’ve also got a couple of my own young ones that I have bred that are the same age — another by Chilli Morning and one by Herald 3, which is a Heraldik xx stallion. So I have young ones to play around with, but nothing that is going to be of interest to anyone else for a few years yet.”

(Hazel’s young horses might just be the right age to peak in time for Brisbane 2032; you can read Heath Ryan’s column on preparing for the Brisbane Olympics here.) 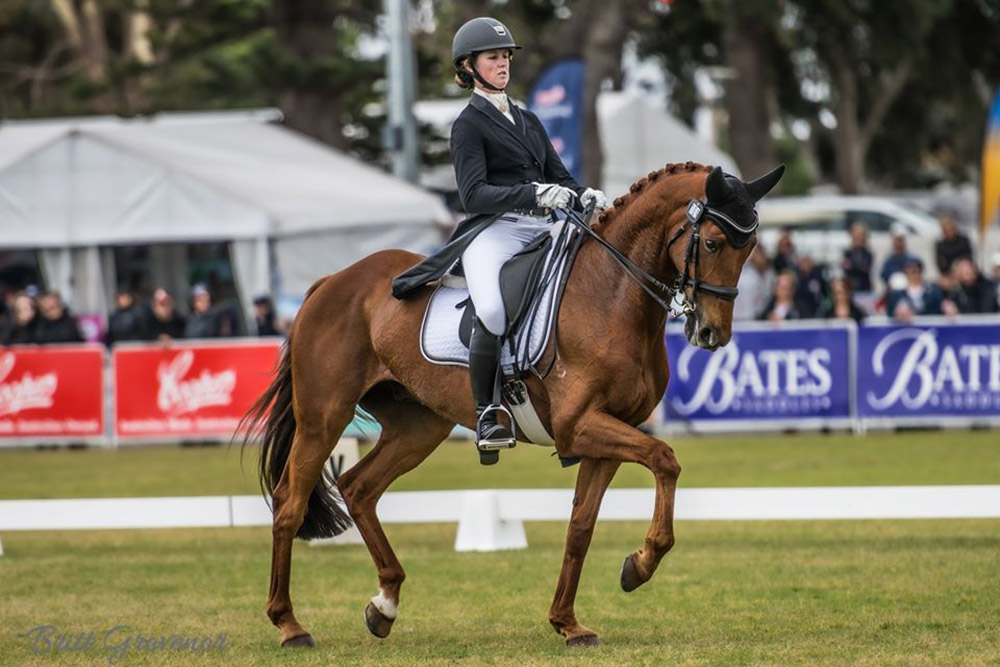 Hazel and WillingaPark Clifford at Adelaide in 2019, where they claimed their third victory. 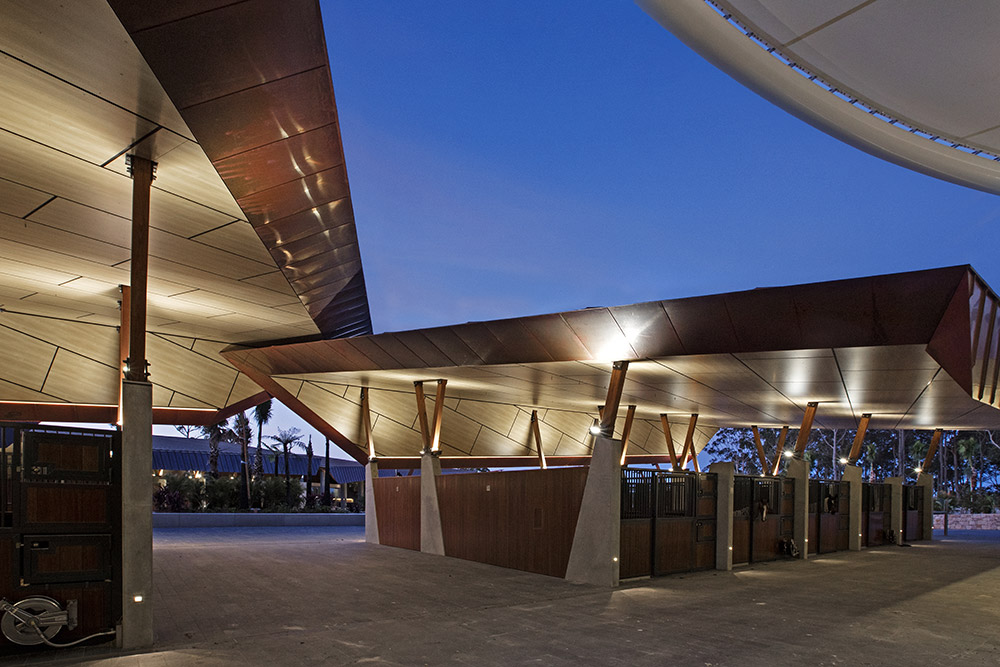 Hazel and Clifford are now based at Willinga Park. © Ginette Snow

“I am a massive supporter of Heath and everything he does,” says Hazel, reflecting on her time at Ryans Horses, which she is incredibly thankful for and can be credited with launching her career. It’s difficult to pinpoint the biggest thing she’s learnt in the last 12 years — after all, just about everything she knows about the sport has to date come via her time there — however, Hazel says one of the main things she’s gleaned is the importance of working hard if you want to succeed at the elite level. “I have learnt to work hard and be resilient through tough times, because no matter who you are in this sport, you are going to have tough times, and you are going to have to work hard.”

Heath would argue that Hazel’s propensity for hard work is innate. “When Hazel first appeared here 12 years ago, she was very quiet. She was a little blonde girl from North Queensland; a sunny face, but she didn’t say anything. And it was hard to tell whether she was enjoying it or not, but she seemed interested,” says Heath, explaining that Hazel has always been very serious in her approach to learning.

“She has always been a real student. She’ll watch you in the eye, and just listen and listen. Even to this day, she’ll never ever tell you why she can’t do something; she’ll just absorb everything, which is very unusual, and then go away and figure out how to do it with more clarity than most people can ever get in their mind. It’s quite phenomenal.”

Hazel was not just a rider at Ryan’s; she was also on a couple of occasions a typist for Heath’s Ryan’s Rave column. “Ryan’s Rave typists have a much shorter lifespan compared to riders at the Ryans,” explains Heath. “Top-of-the-range kids at Ryans last a decade in the saddle, but Ryan’s Rave is so unpredictable and such a rude shock to the system that I have a high death rate with typists.” Heath notes it was one job that Hazel wasn’t keen on, and as such she was generally a fallback option. Perhaps this is the only aspect of Hazel’s career where she explained to Heath why she couldn’t do something!

Heath says that as far as her ability as a rider goes, from her humble beginnings in the bush Hazel is now “right near the top”. He notes that many of our eventing stalwarts — and other elite riders from the heyday of Australian eventing in the 1990s — came from the bush. It’s a phenomenon that is becoming less common among the modern-day young rider, with Hazel being one of the exceptions.

“Hazel is one of the few that has climbed up in recent times to join the established riders in Australia; she’s one of the very few recent protégés operating at the top end,” says Heath, who puts this down to Hazel’s ability to listen and absorb, and her will to work harder than most — which according to Heath is an absolutely critical ingredient for those who want to make an Olympic team.

This article was originally published in Equestrian Life Magazine 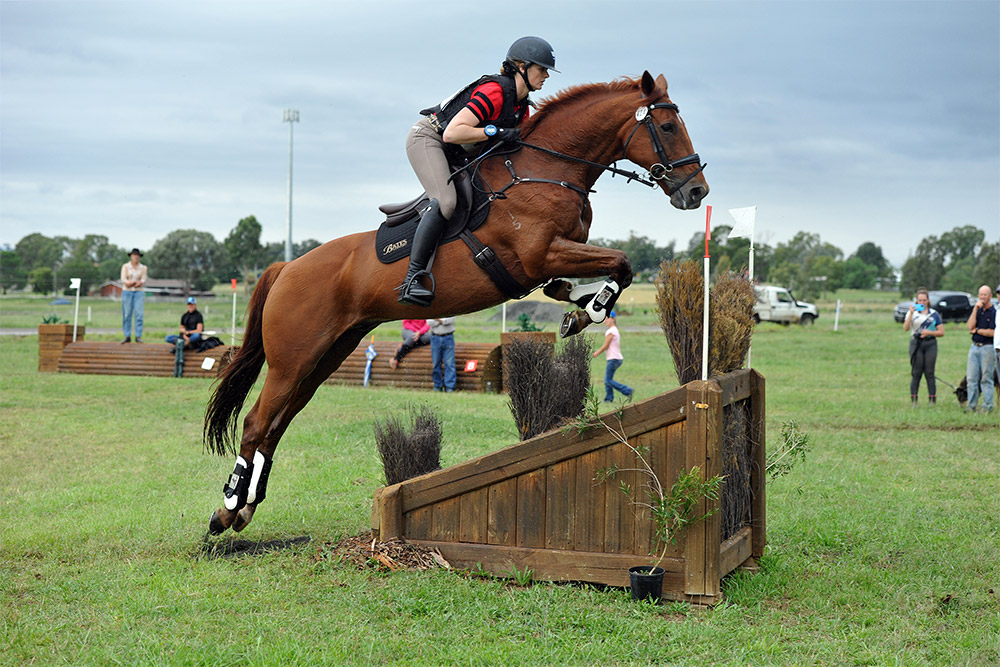 Hazel Shannon and WillingaPark Clifford competing at Tamworth this year where they won the four-star for the sixth time. © Oz Shotz